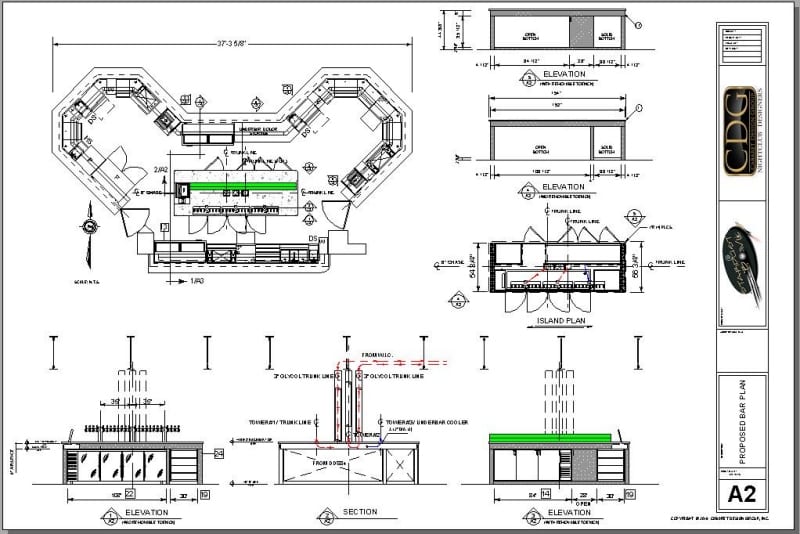 How do you design a large bar? In this article we’ll discuss the basic principles of commercial bar design and draft beer equipment and system design.

Stardust Bowl, an 84-lane bowling alley in the Chicago suburb of Addison, asked us to redesign the bar in their “Club 300” lounge and they really wanted to focus on highlighting their popular and profitable draft beer. Stardust has four lounges at their Addison location, but “Club 300” is their primary nightspot. In this edition of Design Buzz I’ll discuss the challenges of re-designing a large bar and island back bar while developing a way to put the draft beer “Front-and-Center.”

Bigger isn’t always better, and that’s also true with bars. The fact is, the bar at Stardust Bowl was massive, but upon first glance, I immediately sensed a sterile feeling about it. In reality, the bar wasn’t cozy enough for patron interaction. The 40-seat bar was nicely-built but imposing. The bar covered an area approximately 37′ x 23′ (11 m x 7 m), encompassed primarily by a large diameter circular lobe at each end. Being large and circular, the bar lacked that instant appeal patrons need when entering — it didn’t provide any obvious selections for that favorite spot to sit. In fact, its circular shape was imposing, instead of reactive. The fact is, people prefer an immediate choice in unique places to sit that are all their own, and many patrons will quickly adopt that spot and sit there every time they return. This is why restaurants, sports bars and nightclubs with angular-shaped bars are very popular.

HOW TO RE-DESIGN A LARGE EXISTING ISLAND BAR & BACK BAR

The project at Stardust Bowl was challenging. It consisted of two 14′ (4.27 m) diameter circular islands connected by a straight section (as shown in the photo at right). Although the existing bar was large enough to create a new concept (I had to stay within its footprint), I wasn’t sure if enough interior space could be created to adequately feature the draft beer. In other words, I realized that while there was probably adequate space to create a more engaging design, but in the course of accomplishing this, would there be enough space to also address the draft beer?

My first reaction to a new prospective bar design was that there was plenty of space at each end to create customer appeal, but the key to the project’s success was in the island back bar. Bar equipment can generally be adapted to most spaces, but we needed to accommodate a fair amount of equipment for this client. Essentially, the island back bar required a footprint of 13′ x 4′ 6″ (4 m x 1.4 m). Fortunately, the rectangular area in the middle was the key because it was the only portion available for expansion. More about that later.

WHAT’S THE FIRST CHALLENGE WHEN REDESIGNING A COMMERCIAL BAR?

The first mission of the redesign was to reconfigure the circular lobes within the present space, while keeping the existing plumbing intact. What we came up with is two 5-sided rectangular polygons. This is the ideal shape for a bar that your customers will like because it encompasses two 45 degree corners and three short sides; each leg of the new island sits between two – five patrons. The new bar design will now enable patrons to have a ton of unique places to sit that can be quickly spotted.

The thing about this bar design that was the most challenging was to feature 24 brands of draft beer — all accessible from the bowling alley-side. After all, beer is the beverage-of-choice among bowlers, and the Owner of Stardust Bowl wanted to increase beer sales by means of a strong visual presentation. A glycol beer system was already in-place and serviced by one 8-faucet beer tower. The customers like the ice-cold beer and the focal point of this bar redesign was to expand this idea and place it “front-and-center.” Therefore, the tap beer would be moved to the new island back bar where the offerings could be expanded. The existing beer tower was the Micro-Matic “Metro-T” (the downloadable cut sheet is shown below), which can be expanded for a great visual presentation. Additional towers can be laterally added (by coupling hardware) so as to provide a massive display. Moving the existing tower to the island back bar was simply accomplished by extending the existing 8-brand glycol line and dropping it vertically inside a decorative shroud. A second 8-brand glycol line was added to the system in a similar fashion.

The third tower was designed to feature craft beer, but the question was how to service an 8-faucet tower. The Owner wanted to use a direct-draw box, but the customary arrangement is to use a 4-brand air-cooled faucet directly above the box. The box from which we were intending to draw was five feet away! This is where an expert mechanical installer pays huge dividends. Tom Steuver, owner of Steuver & Sons, the Chicago-area mechanical contractor for Micro-Matic systems, had a great idea. Tom recommended that we tap a glycol feed from one of the two 8-brand glycol lines to cool the third beer tower. With this in mind, we designed a 6″ overhead mechnical chase so we could connect the faucet to the back of the direct-draw box (shown in photo, right). The direct-draw box runs at 37 degrees F and the new glycol-cooled tower would effectively enable all eight lines to deliver beer at the faucet at 33 degrees F. In addition to the 84″ direct-draw box, the back bar island was also designed to house a 3-door beer cooler (for domestic bottles), plenty of glass storage with two Glastender BGS-30 glass storage units (the downloadable cut sheet is shown below) and a custom POS station.

We think the newly-designed bar for Stardust Bowl will be very popular among all bowlers and new visitors.

HOW MUCH DO DRAFT BEER SYSTEMS COST

Call Us for Your Next Design Project

Our standard bar design service includes all construction plans and equipment layouts. We would be happy to assist any night club or bar owner who would like to incorporate time-proven design ideas into your venue. Please feel free to contact us.

How Can Bar Owners Be So Unaware of Losses?