Kegerators or Glycol Beer Systems – Which is Better? 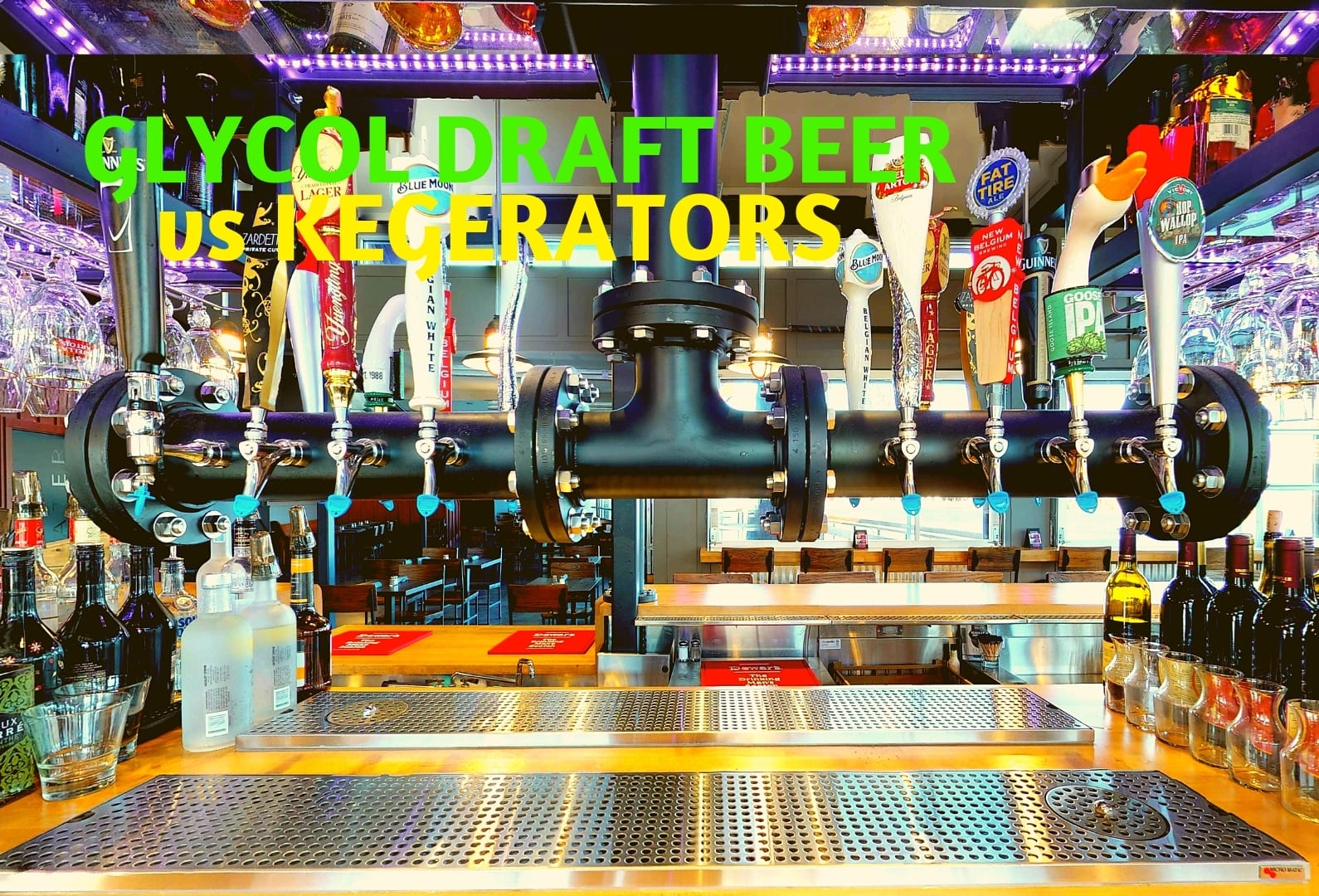 Kegerators or glycol beer systems – which is the best draft beer system to buy?

If you’re confused over which draft beer system to purchase, here’s the costs and comparisons of each.

For restaurant or hotel owners in the market for a draft beer system, what’s the best recommendation? Which are better – kegerators or glycol beer systems? Many claim that the glycol chilled draft beer system is the only practical choice. While this is my hands-down favorite, draft beer systems is not a “one-size-fits-all” solution. A new twist of an age-old product happens to provide another option – custom kegerators. Let’s dive a bit deeper into this so everyone can understand all of today’s considerations for making an educated decision.

Glycol beer systems offer many ownership advantages, such as:

According to Micro Matic, the industry leader in cutting-edge draft beer systems, for a glycol beer system costing $10,000, the return-on-investment (ROI) can be realized in the first 19 kegs sold! For some venues, this could be one week!

ARE GLYCOL BEER SYSTEMS FOR EVERYONE?

Given all the above, why would anyone would want to consider anything but a glycol system? You certainly couldn’t go wrong. However, to make the investment worth while, buyers need the following:

These are the most critical fundamentals of any draft beer system. The dedicated walk-in cooler assures the delicate temperature of the draft beer is maintained (referenced in the article below). Not every hotel, restaurant or bar can support both criteria. The architectural plan shown here is of a recent hotel bar we designed. This bar was included as part of a multi-million dollar facility renovation.

How Do Glycol Beer Systems Work?

At first glance, one would have to believe that in a facility as large as this, finding space for an extra 8’ x 10’ walk-in cooler would be easy. This just wasn’t the case, despite the hotel’s significant size – not uncommon with many existing facilities. When planning a glycol-cooled system, we also have to accommodate the installation of the trunkline. This can also be a deal-breaker for those who don’t want to open-cut concrete floors. What alternatives do bar owners have for selling draft beer? Actually, kegerators can be a viable option, but I’m not referring to the traditional oversized kegerators, such as the one shown in the photo below, right.

SOME FACTS ABOUT KEGERATORS

THE EMERGENCE OF CRAFT BEER

What are people drinking nowadays? Craft beer! Over the past few years, craft beer has turned the beer industry upside down. However, the most popular bars are using sexy, innovative draft beer towers to sell their craft beer, which is packaged in small kegs. So, while some still have the old style kegerators with their blaize’ towers, why would anyone want to continue using them? With emerging new marketing, buyers now have two choices: custom kegerators or glycol draft beer systems.

The real problem for bar owners selling U.S. domestics is the profit model: it isn’t nearly as profitable as selling craft beer – which is what everyone is drinking nowadays, right? To illustrate this point, consider the following excerpt from the November 7, 2018 edition of the blog “Bottom Line,”

“….you might realize a profit of between $250 and $300 selling a keg of beer with national brands such as Budweiser, Coors, Miller and others, whereas serving a keg of popular craft beer brewed locally might net you between $400 and $500….it makes you wonder why every establishment in the country doesn’t take advantage of this money-making proposition.”

THE EMERGENCE OF CUSTOM KEGERATORS

The craft beer craze has paved the way for a modern kegerator that works beautifully and meets all my checkpoints. Ditch those behemoth kegerators of yesteryear. It’s time for new thinking, my friends! The core of this design is a back bar cooler that has an overall depth of 24”.

We refer to 24″ coolers as “built-in” because they work with standard underbar equipment, thereby preserving the bartender aisle width.

The draft beer tower and controls round-out the picture, but this requires professional assistance, which I’ll discuss later.

NEARLY ANY 24″ BACK BAR COOLER CAN BE CONVERTED

An example of the custom kegerator we specified is shown in the photo above, right. This is a Glastender C1FB84-R, which is an 84” x 24” back bar cooler. This cooler was the building block for the kegerators I designed as part of the subject hotel bar design. Any 24” deep back bar cooler can be used to build a craft beer kegerator; however, only a few manufacturers offer these, such as:

While craft beer kegerators offer a lower investment, some people may dislike the lack of selection of draft beer towers.

Kegerators are air-cooled draft beer systems, which require a draft beer tower that differs from those of glycol-cooled systems.

Here’s some cost information on glycol draft beer systems in 2019:

KEGERATORS or GLYCOL BEER SYSTEMS: WHICH IS BETTER?

Given all the above, which is better: kegerators or glycol beer systems? Both systems have far more merits than drawbacks. I contend that glycol beer systems are the best for those who can afford and manage them. Craft beer kegerators offer a cost advantage, but having adequate backup cold product and constant keg-changing can be challenging.

HOW TO PURCHASE A CUSTOM KEGERATOR BEER SYSTEM

The kegerator with the custom draft beer tower shown above is a custom-designed kegerator and isn’t available on any website that I know of. Kegerators such as this need to be designed and specified, which is a service we provide. While kegerators may appear simple, there’s a lot to know. If you’d like more information about this please contact us.

What Are The Best Commercial Bar Tops?

WHAT DOES IT COST TO BUILD A BAR?