How Much do Draft Beer Systems Cost? 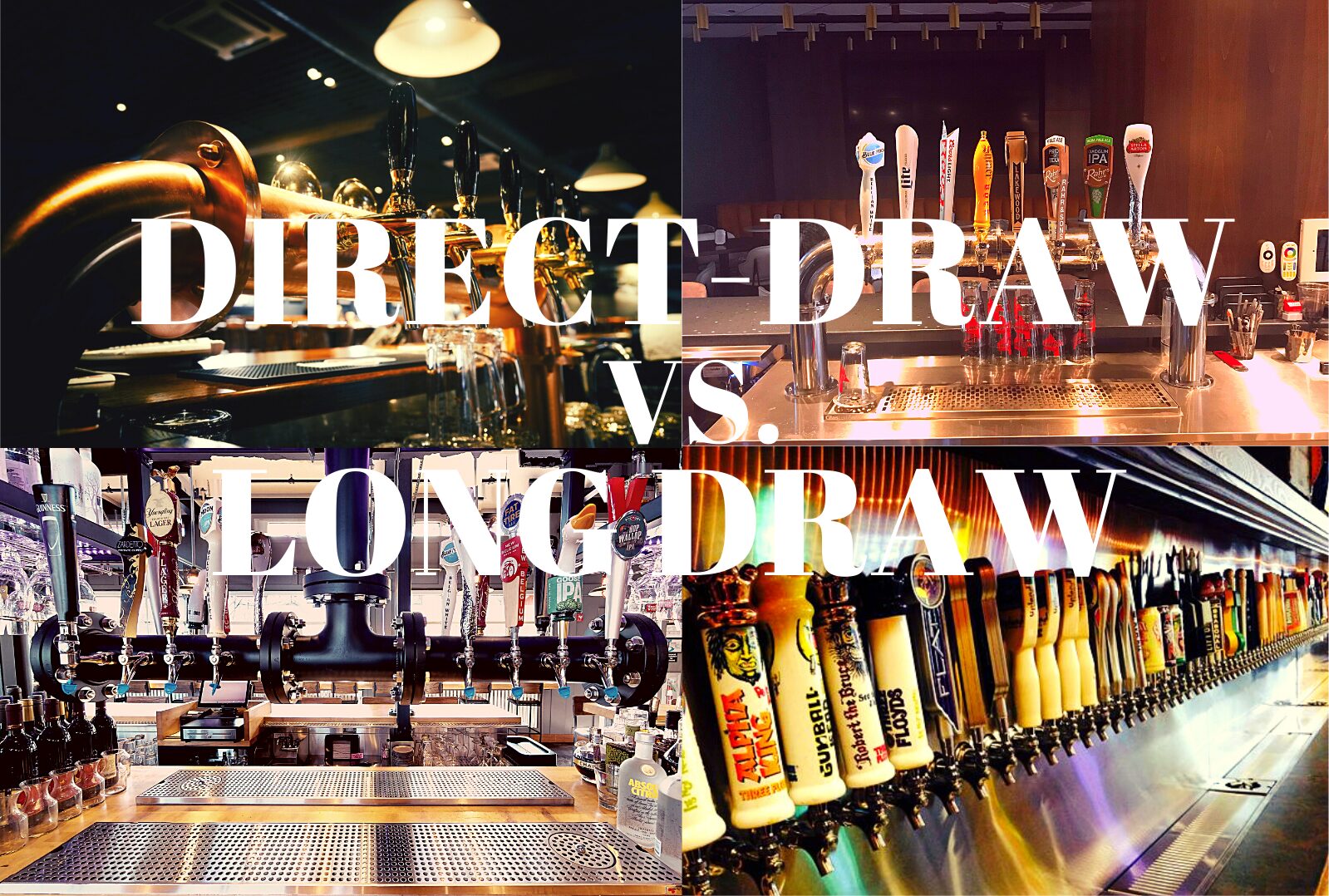 How much do direct-draw and long-draw draft beer systems cost?

Learn how the various draft systems compare – such as kegerator, beer walls, air-cooled and glycol systems.

WHAT ARE THE CHOICES FOR DRAFT BEER SYSTEMS?

Nowadays there are many choices for a prospective draft beer system owner. Draft beer systems are categorized “Direct-Draw” or “Long-Draw” systems and are differentiated by distance. Direct-draw systems are in the immediate vicinity of the bar whereas long-draw systems are remotely located from the bar. In terms of cost, the real issue isn’t about distance but more about the delivery method. As we’ll illustrate, there are options with either system.

In the U.S., the traditional method of delivery for draft beer was air, hence the name “Air-Cooled” system. The air-cooled draft beer system is still in use and utilizes a mechanical blower to chill the draft beer lines over a very short distance. This is accomplished as follows:

The best example of direct-draw draft beer systems is the traditional kegerator. As shown in the photos below, kegerators such as this have been in U.S. bars since the 1940’s.

Traditional kegerators are designed to house standard U.S. 1/2-barrels of beer. The subject kegerator is designed to dispense four brands of U.S. domestic beer and has enough room for one backup barrel.

HOW MUCH DO TRADITIONAL KEGERATORS COST?

The subject kegerator is still being marketed and in late 2021 costs around $5,000. With the emergence of extremely popular and profitable craft beer the 4-faucet tower is no longer efficient for a 94″ kegerator. Craft beer is delivered primarily in 1/6-barrel kegs (known as “Sixtels”).

If a bar owner wants to feature craft beer, this cooler could house more than 14 sixtels. The other problem with the traditional kegerator is that most are 29″ deep, which is not in compliance with the 24″ standard we use for built-in bar equipment. Traditional kegerators impact the bartender aisle by reducing it 5″.

Surely, there must be an updated idea for kegerators.

As I mentioned earlier, traditional kegerators have a larger footprint which eats into the bartender aisle. Because space is a premium in commercial bar design, we always specify built-in kegerators. However, the built-in kegerator is not generally a stock item. It is very difficult to find a 24″ deep kegerator as a stock item. The problem seems to be related to the customization, as there are many variables with built-in products, especially for bar owners whose locations are at higher altitudes. We specify custom kegerators nearly every day.

HOW MUCH DO CUSTOM KEGERATORS COST?

Because they’re 24″ deep, custom kegerators can fit anywhere along the front bar or back bar, as shown in the photo gallery below. However, the back bar is generally our recommended location. In fact, the towers are commonly installed on top of the back bar. Glastender offers a very nice air-cooled tower (shown below). An 84″, 8-faucet custom kegerator costs about $5,900, anywhere from $600 – $3,300 for the tower plus about $1,000 for installation.

The only limitation of the custom kegerator is the size and variety of air-cooled towers, which is generally limited to about eight faucets. This is because of the limited space for the tower and the storage capacity of the kegerator itself. The Glastender model (shown below) enables the bar owner to have six backup kegs inside the cooler. This is a reasonable investment for someone who’s looking to add draft beer to their menu.

The other type of direct-draw system is the beer wall. The beer wall is a great approach if your walk-in cooler is located directly behind the back bar. Most people visiting a bar such as the one in the photo below, would think that’s a glycol system. After all, that draft beer tower is reminiscent of a glycol system.

HOW MUCH DO AIR-COOLED DIRECT-DRAW WALL SYSTEMS COST?

For an air-cooled beer wall to deliver maximum profitability it’s imperative to have a dedicated walk-in cooler. This means that food and bottled beer should not be stored with the draft beer.

The air-cooled long-draw system is the other traditional method of dispensing draft beer. Bar owners are still utilizing this method, but the guidelines for locating the walk-in cooler are strict:

Draft beer is delivered from the walk-in cooler to the tower via a mechanical duct (“Shaft”). The shaft houses a number of PVC product lines, each of which contains a different brand of beer. Because every installation requires at least one 90 degree turn (for the shaft), the greatest separation from the tower to the walk-in cooler cannot exceed 20′. Therefore, the optimal location for the walk-in cooler is in a basement, directly below the bar.

HOW MUCH DO AIR-COOLED LONG-DRAW SYSTEMS COST?

In terms of cost, this system ranges from $1,500 – $2,500 for the tower, $800 for the drip tray and $1,000 – $1,500 for installation. However, unlike the wall system, the air-cooled long-draw system has the same limitation in tower designs as kegerators. Examples of air-cooled towers are shown in the gallery below.

Because the draft beer products are stored in walk-in coolers, larger towers are available.

The glycol-chilled system is the king of all draft beer systems.

HOW MUCH DO GLYCOL-CHILLED DRAFT BEER SYSTEMS COST?

For optimal performance, glycol-chilled draft beer systems should have a dedicated walk-in cooler, which adds about $10,000 to the cost of the investment

Need help with your bar design? Contact Us Today!

PLANNING A RESTAURANT BAR – HOW MUCH SPACE DO YOU NEED?